This has made for a super busy time, I shan’t bore you with words like ‘busy’ – let’s get right down to the pics and the stories of how these came to be. *actually it was exciting!

The exhibitions The Substation Contemporary Art Prize at The Substation and Sheen Slip at Alternating Current Art Space opened on 8th and 9th September respectively. Sheen Slip has been in the works for a few months now and I’ve been gradually preparing for it, working on most of the paintings in the show simultaneously. I like to work that way. For that I can partly blame drying time of enamel and partly just liking to multitask in colour. 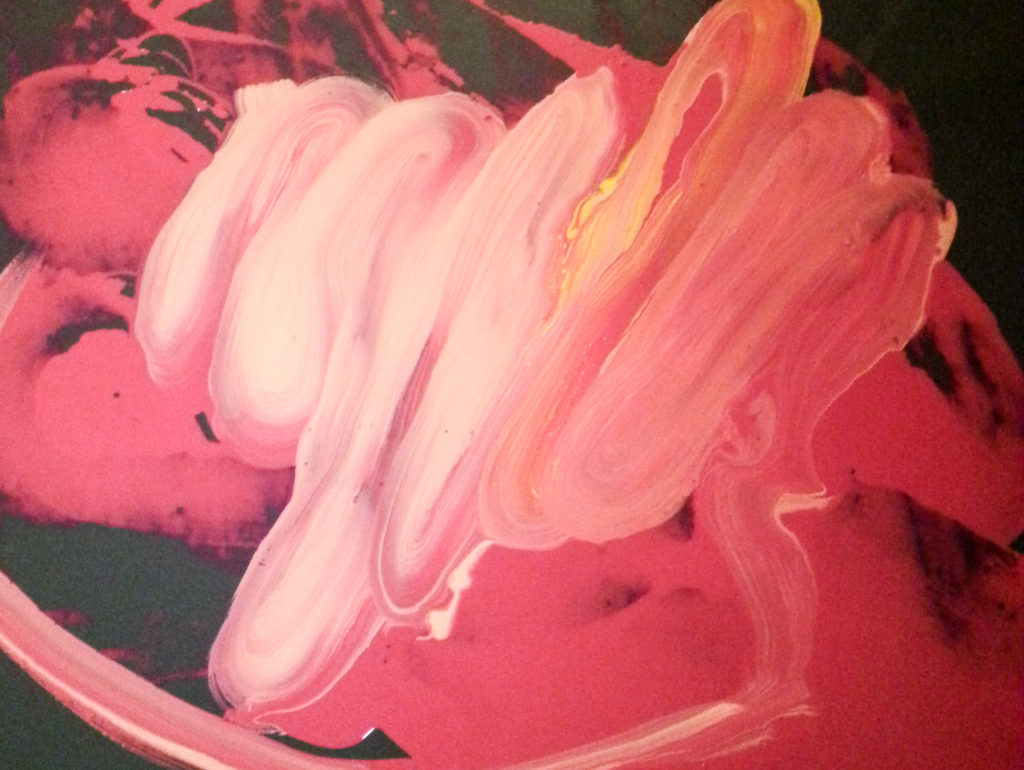 Somewhere along the way, I submitted my work from Delira to The Substation Contemporary Art Prize, hoped for the best and forgot all about it. Then the email telling me I was shortlisted for the prize arrived and was offered the billboards, six of them, that run along the railway-line-side of The Substation, to install my work on. Now for the complication: my Deliria installation was, of course, destroyed when I took it down – so I needed to remake the work, only several times bigger to suit the 6 x 2.2m x 2.2m billboards for the show and in a pretty short amount of time. 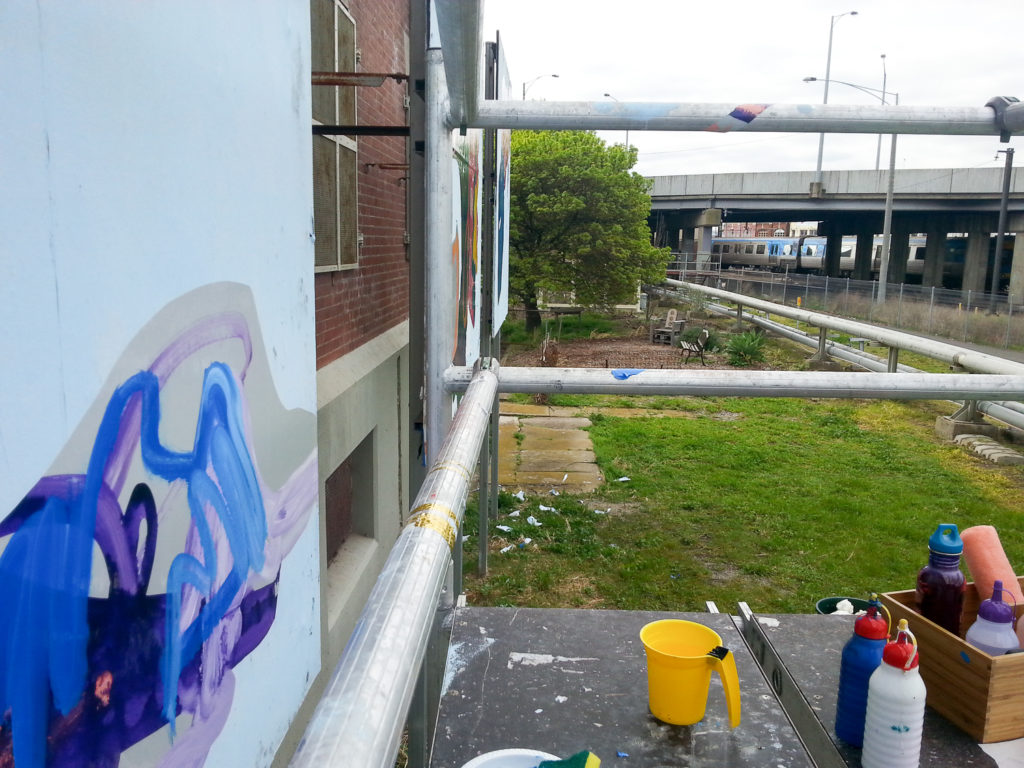 For Sheet Slip at AC Art Space, I was planning to show more work on panels than I have before. When painting onto aluminium panels, I am trying to make the paint do the same thing that happens on vinyl, happen on aluminium. It sounds easy, but I’ve never found it so. Using a different type of paint with different qualities adds a learning curve just to be able to do the same thing.

The paintings on vinyl in the show are a bit different to my other vinyl works. They don’t go down onto the floor to walk on. I wanted to try pulling them back to something a bit more conventional. I installed them at conventional hanging height (FYI that’s centred at 155cm from the floor) and didn’t push them down onto the floor. I couldn’t abandon corners completely though and two of the three vinyl works wrap around concave corners in the gallery. Interesting to have them at a normal artwork height but bound to the building.

Making the painting for the billboards at the same time had its trials. Mainly trials of lack of space in the studio and how do you make such a large work with a limited amount of space? A day after each length of vinyl was painted I rolled it loosely to allow it to keep breathing and drying and stood them up on their ends in the corner, then moved on to the next one. I was pretty sure I was brilliant, but it turns out this had its own problems. How can you make a large cohesive artwork when you can’t see most of it (because it’s rolled up)? The answer is a little extra mucking around. 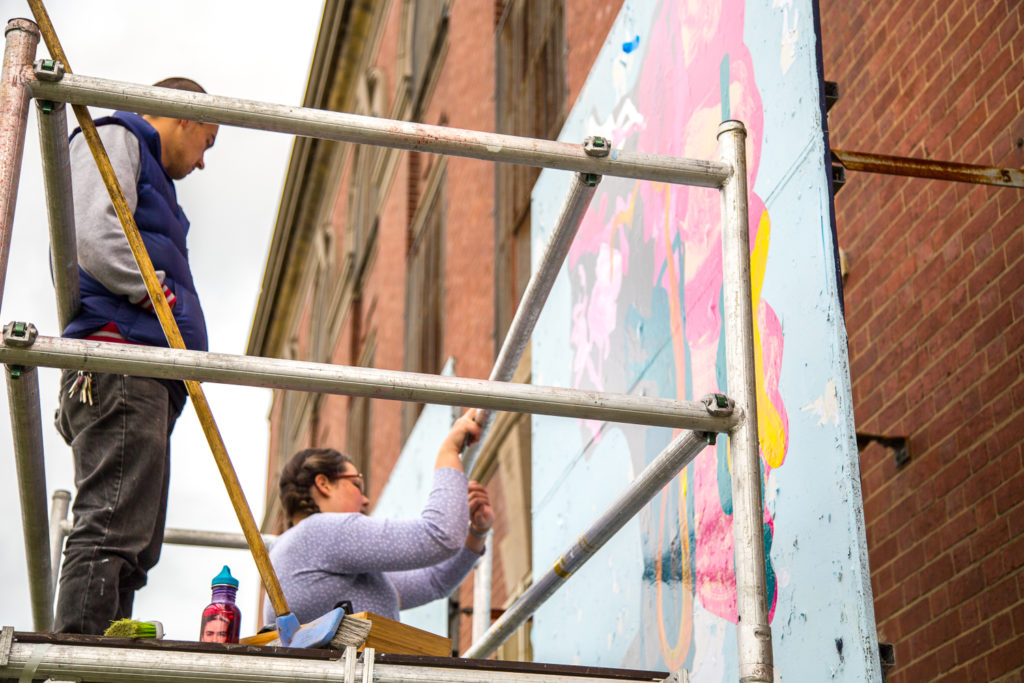 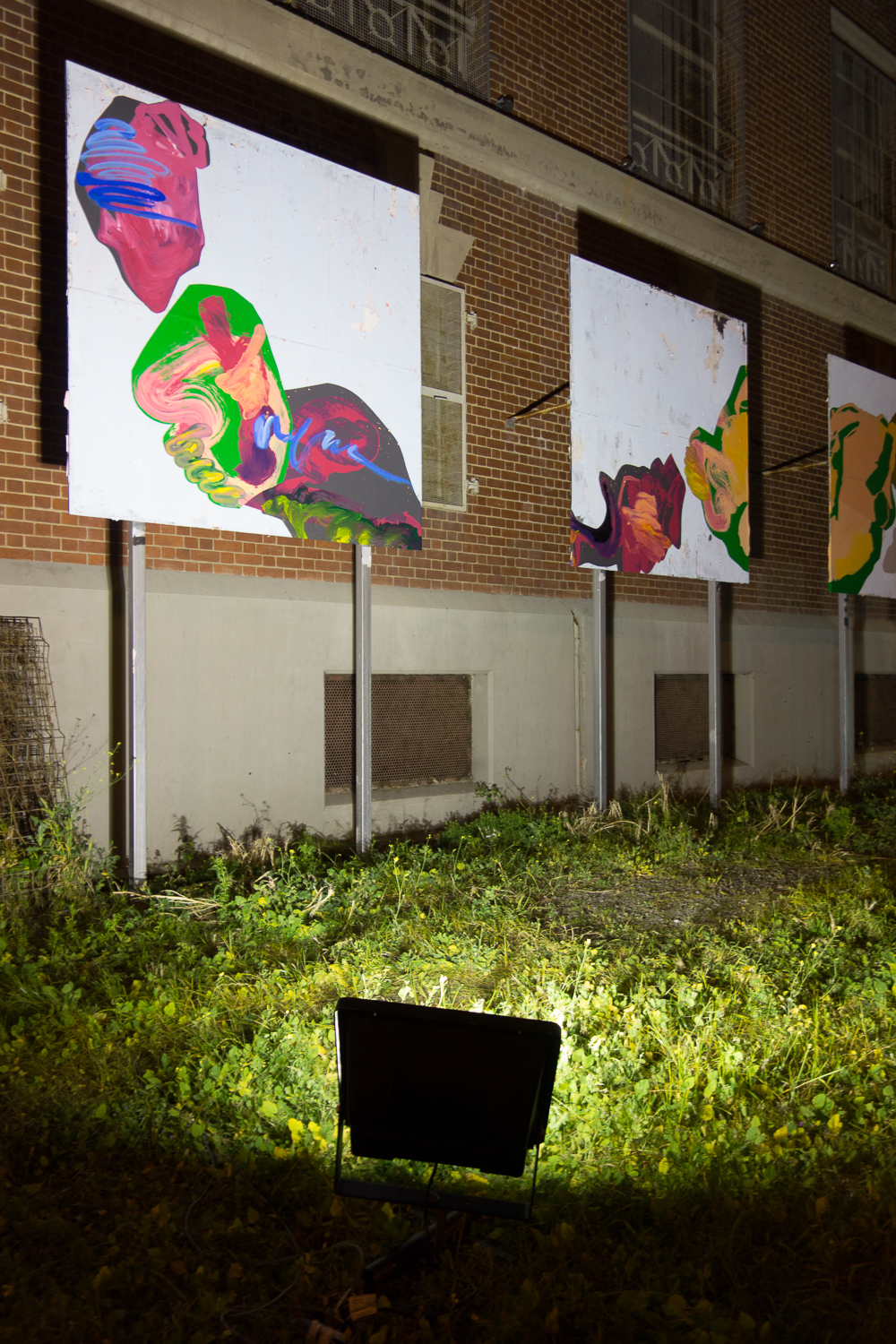 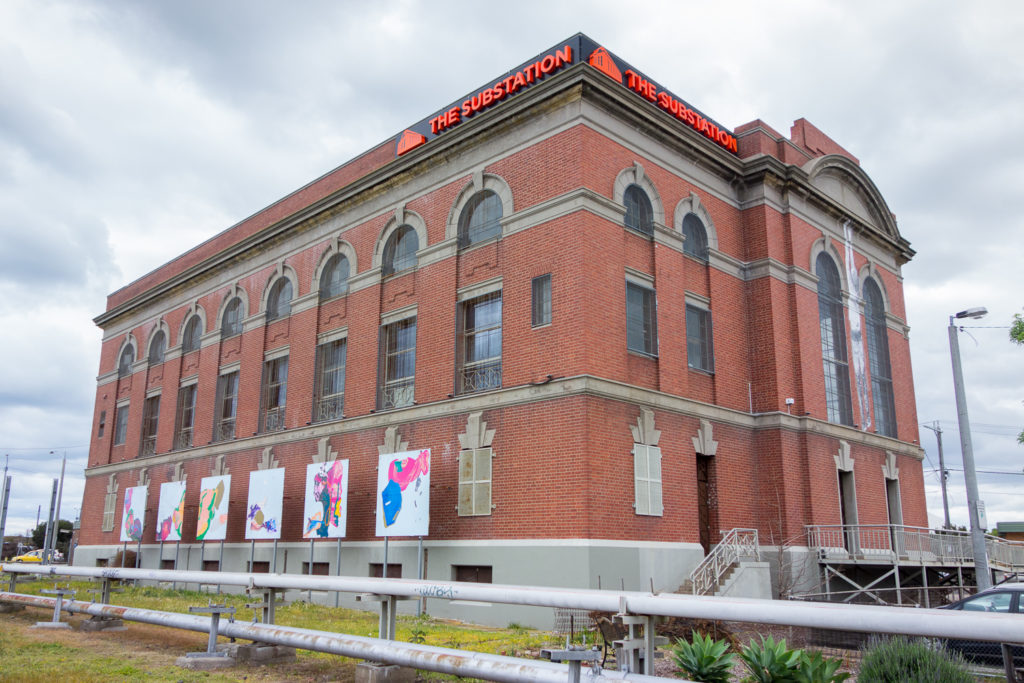 I installed on the Substation billboards with the help of scaffolding and a fantastic assistant and after two days, it was done. The surface of the boards, having been used for lots of paste-ups over the years, is rough, papery, peeling and pale blue. Trying to clean it up a bit beforehand meant peeling back a little bit of paper, which led to peeling back a lot of paper and it was kind of a losing battle. I like the peeling spots, they’re offer a good contrast to the slick and glossy and vinyl brush strokes. 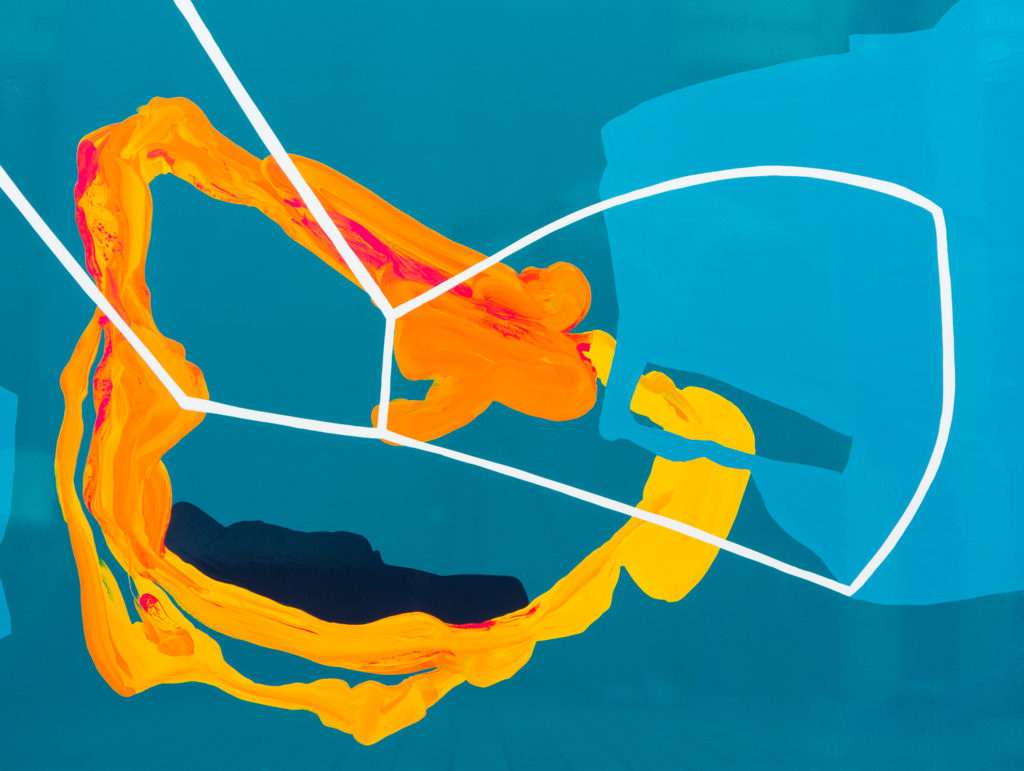 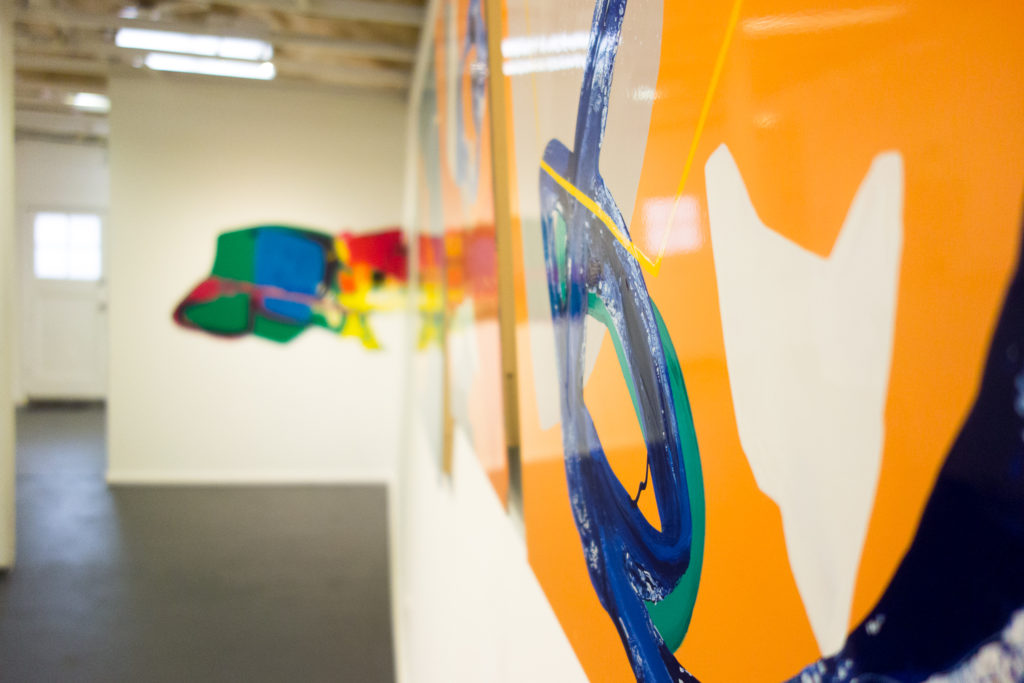 Back to the two exhibitions in two days… The Substation Contemporary Art Prize was announced on Thursday night and the winners were Sonia Leber & David Chesworth and the Westie Award by Laresa Kosloff. Pretty amazing to be shortlisted amongst such a bunch. Then on the following night my solo exhibition at Alternating Current Art Space opened, and fellow artists Kate Wallace, Jessica Ledwich and Melanie Joy Caple’s shows were in the other three gallery spaces.

Now that the week is over, I have been expecting to have spent all my creativity, but apparently painting breeds painting. It seems, I have a bunch of new projects and new works floating around in my head. I’ll just be sure and avoid the double exhibition thing in future. 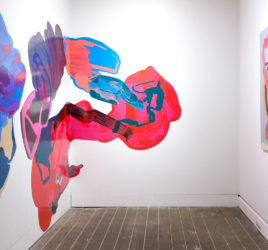 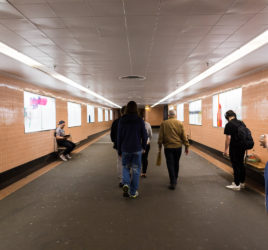 Developing Installations for Fast and Slow, Still at The Dirty Dozen